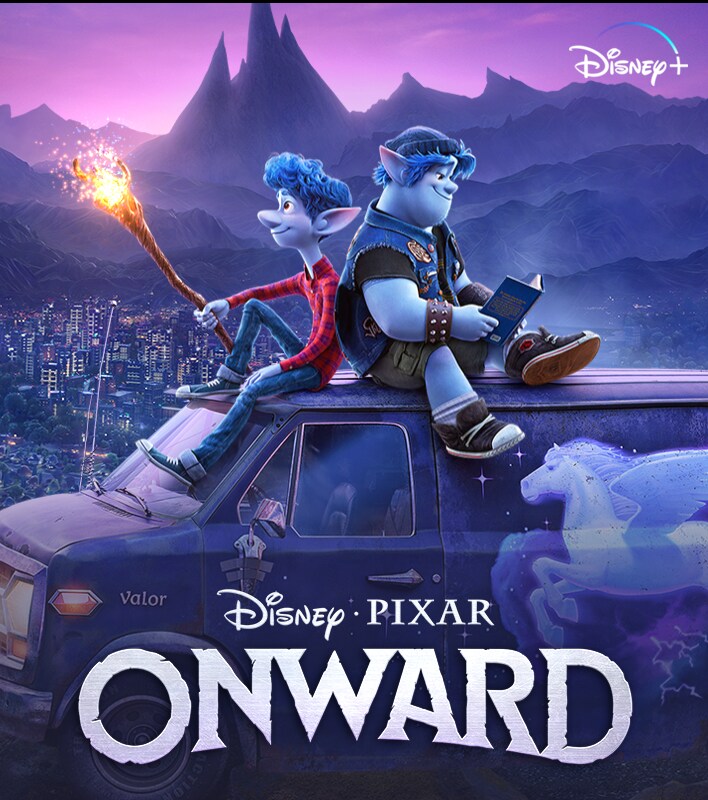 Magic, Adventure, and Everything Else

I don’t know about you, but 2020 didn’t produce all that many movies that truly inspired me to go to the theater.  In fact. . . now that I stop to think about it, I don’t believe that I actually went to the movie theater this year.  Which means the last movie I watched in theaters was Star Wars: The Rise of Skywalker.  That is sad.

When Onward came out this March, I heard some crazy things.  The most common theme I heard in all the gossip about Disney’s latest movie was that the main character (played by Tom Holland) was gay.  I did NOT feel like watching Tom Holland fall on his face after such a fun ride with the Avengers movies and the Spider-Man movies.  So I forgot Onward‘s existence, and moved on with life.  (I’d have to say . . . I did not feel deprived!)

Upon checking over the movies at the public library on Monday night, I found nothing that sounded appealing.  They had Onward though, and I smelled a movie review.  The introduction speaks of the by-gone days of magic and adventure and I decided, why not?  The rest is history.

Ian Lightfoot is an elf.  Not a Lord of the Rings elf mind you!  Ian is blue with pointy ears.  In fact, he looks like a mature smurf who grew up into a normal human-sized being.  That aside, it is Ian’s 16th birthday and he is going to be more like his dad, starting today.

No surprise – Ian does not successfully triumph the world in a single day after making the resolution to be more like his dad.  He feels like a complete failure.  Sound like a typical teenager, coming-of-age story to you?  It doesn’t stray far from that path.

Enter Mrs. Lightfoot.  Before Mr. Lightfoot died, he left a present for his two sons, Barley (Ian’s older brother) and Ian.  Their mother has kept it wrapped in the attic for many years, waiting until both of the brothers are past 16.  Lo and behold, upon unwrapping it, the Lightfoot boys discover a wizard’s staff and a visitation spell.  If they can use the staff correctly and cast the spell, they will be able to spend 24 hours with their dad before he disappears again into oblivion, never to be summoned again.

If you saw anything of the gazillion trailers that were played in January and February 2020, you saw that the product of the visitation spell was only the bottom half of Mr. Lightfoot.  The rest of the movie takes the Lightfoot brothers on a quest to find another phoenix gem, the magical stoner2 they need in order to complete the spell and see their entire father.

We keep a record of movies my mother falls asleep in.  These include Home (2015) and Moana (2016), but the most memorable was when she fell asleep in the theater during Captain Marvel (2019).  Good times.  Although my mother didn’t actually watch this with me, I can see this as another movie she would have fallen asleep in.  I mean . . . what else do you do when a significant portion of the film is spent watching the protagonists run from a biker gang made up of pink, spiky-haired, high-pitched (yet somehow masculine. . .) fairies?

I found the movie somewhat dumb.  That is just personal opinion, but it followed a very common pattern for modern movies.  It’s a coming-of-age frolic with a magical twist.  I have to admit I laughed . . . but only at the stupid parts because I couldn’t believe how cheesy it was.

Personal opinion aside, there were some powerful messages in this film.

I was surprised to find out that Disney actually kind of cares about the nuclear family.  It is subtly acknowledged that children – especially boys – who grow up without a dad will have struggles.  These struggles usually manifest as self-doubt, lack of discipline, and a severe lack of gratitude.  However, while giving a nod to how hard it is to grow up without a dad, Onward still reminds us of the world’s (and Disney’s) philosophy that dad figures are oblivious, dumb, awkward people who are merely required to produce offspring.  We see this play out in Mrs. Lightfoot’s boyfriend, Colt Bronco.  Granted, he’s a centaur so he’s not very, um, self-aware?  But especially at the beginning of the film, he is presented as a guy who is almost incapable of understanding the two boys who might one day be his step-sons.

I was extremely surprised at how Disney played out the brother-to-brother relationship.  The surprise didn’t come until the last 10-15 minutes of the movie.  Up until then, it was a typical teenage story that centers around the supposed entitlement of the protagonist.  I was very ready for the film to rush in with the usual, including family apologies of lack of understanding and promises to take better care of the teenager’s ego and personal desires in the future.  I was dead wrong.  *SPOILER ALERT* Near the end of the film, Ian comes to the realization that, although he didn’t have a dad, he had a brother who looked after him and did all the “dad things” with him, i.e. Barley.  This produces a rush of thankfulness that leads Ian to make a genuine, sacrificial, and extremely loving decision for his brother when they discover that only one of them will be able to see their dad (a curse in the form of a fierce dragon has to be destroyed by one of the brothers in the mean time.)  I was nearly in tears at this point.

On the negative end of things, we do see a brief mention of a homosexual relationship.  A female cop is sympathizing with someone about step-child relationships and mentions her girlfriend’s child is causing her a lot of difficulties.  At first glance, I shrugged my shoulders and appreciated the fact that this was the only sexual-related content in the film.  However, if you take a moment to think about it, this instance is quite disturbing.  Ten years ago, I would have been traumatized by the mere mention of homosexuality in a children’s movie.  Now, I am happy to see only one mention of a homosexual relationship.  What happened in the last 10 years that changed my perspective?

The answer to that question is not that I am woke, not that I am becoming less of a homophobe (mostly because I was never a homophobe in the first place), and not that I am becoming an eternally affirming lump of a human.  The answer is that I have been conditioned by the world.  Plain and simple.  My brain and my thought processes have been acclimated to the presence of homosexuality.  How does that happen?  By only mentioning a homosexual relationship once in a movie.  Maybe that sounds crazy to you, but that’s how these things progress.  Crazy things like homosexuality can be slowly normalized by slowly, yet progressively including that agenda in the media, music, books, etc.  And after all this conditioning, I look at a movie like this and think, “That’s great!  They only mentioned homosexuality once.  That’s not bad.”  Do you see how depressing that is?

The only other factor that could be a concern in this film is the amount of magic.  While there isn’t necessarily black magic, dark arts, or other forms of evil wizardry, magic abounds – it’s really the center of the film.  The magic is not too concerning; however, there are a lot of spells.  I felt like the spells were taken very lightly.  There was also the idea (although mentioned just briefly) that some are more “gifted” than others and are able to use magic.  While being a children’s movie, elements of the occult can still be present with the spells and the quest that the brothers embark on.  Still, on the surface, I didn’t see anything inherently wrong with the style of magic used in this film.

Honestly, I could go either way on this film.  It was kind of cute, and had a very redeeming situation at the end of the movie.  But, at times I was rolling my eyes and felt bored.  The only thing that might keep some parents from enjoying this film with their little ones is the magic.  There are numerous spells, and they are taken rather lightly.  This has kept many out of the Harry Potter bandwagon, and perhaps it should keep you from diving into Onward.  Otherwise, this film has little to worry parents, and a few things to keep the little ones entertained.

Are you planning to watch this movie?  If you’ve seen it already, what did you think?  Let me know in the comments below!

Until the next bowl of popcorn. 🙂