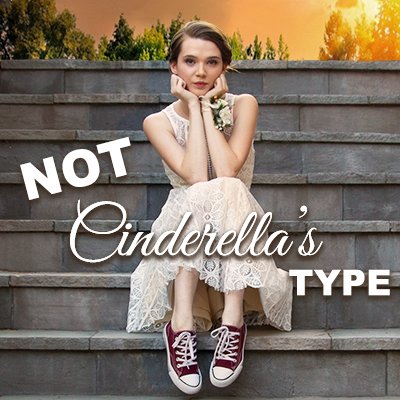 I’ve been looking around at Cinderella movies lately (I’m working on an article that will rate 10 or so Cinderella movies worst to best!) and I stumbled upon another random one.  A vague description drew me in and I decided to watch it, perhaps against my better judgment.

I’d have to admit . . . I didn’t know there were this many versions of Cinderella’s sad, but romantic life.  Most of them really can’t compare with the two top Cinderella movies (that I cannot reveal at this time 🙂 ) due to the absolute cheesiness of the plot, acting, script, and filmography in these cheap re-makes.  And yet, somehow these cheesy Cinderella re-dos still keep popping up.  You would think someone is watching them if they keep making them . . .

Cindy “Indy” Zimmerman has the perfect life.  Her dad is long gone, but she has a mom who loves her.  It’s always  been the two of them as long as Indy can remember.  But at the age of 10, tragedy strikes and Indy is suddenly an orphan with nothing to her name but two suitcases of clothes and a fluffy cat given to her by her mother for her 8th birthday.

Indy moves in with her aunt and uncle who “graciously” have taken her in.  She’s given a room in what appears to be the attic and hardly given the opportunity to grieve before she is handed her allotment of chores (which essentially means all of them).

Fast forward six years, and not much has changed.  Indy and her cousins, Jada and Kaitlyn, now attend high school “together”, meaning Indy walks to school alone while her fashionable cousins drive their green hatchback with pink eyelashes.  Indy continues to slave over chores, meals, and anything else her aunt prefers not to do.

It looks like nothing will ever change, until Indy loses the last thing that she holds dear.

I’m starting to think that movie companies use Cinderella-esque stories to draw in the female crowd and get exposure for the rest of their movies!  A vague description, a cute cover, and promises of a potentially-handsome “prince” are all used as click-bait to get us to watch these films.  I’ve got to say, it works for the most part.  In my case, I’m a small exception since I didn’t actually feel a strong desire to watch the movie . . . my excuse for clicking is that I wanted to add another Cinderella movie to my list of reviews.  (At least, that’s what I tell myself.)

All in all, this was not a bad movie, at least in some senses of the word.  However, it was cheap in all of its cheesy manifestations – set design with little change or variety; amateur, fakeishly passionate acting; sub-par plot and script.  So I suppose this comes down to your definition of a bad movie – bad content or bad acting!  But enough of me yaking, lets get to the review.

As far as questionable content goes, there wasn’t much.  There was no violence, but there was a flash-back scene after a car-wreck and we see a woman on the ground dying, with some blood on her shirt.  There are a few kisses, but nothing leads anywhere and there aren’t any suggestive situations or conversations.

Every Cinderella movie has to have a different twist, otherwise it’s just a plagiarizing copy-cat.  This movie twists the plot towards a very modern retelling (we’ve seen this also in A Cinderella Story) and actually draws on the idea of emotional abuse.  It’s an interesting way to take the story.  Indy befriends the “prince” or popular boy at school and his dad just happens to be a family therapist.  Apparently, the “prince”, Bryant Bailey, actually listens to his dad’s advice (unlike most of our teenage heroes) and harps on the abusive aspects of Indy’s relationships at home.  I say harps because Bryant is really annoying at the beginning of the film.  POTENTIAL SPOILER: Indy denies this argument at first, but as things escalate through the film, she eventually agrees with Bryant (and his dad) and Bryant essentially helps her run away from her aunt and uncle.

While the emotional abuse accusation isn’t typical of Cinderella movies, in our world today, any form of abuse is criminal and the child would be removed from the home and into foster care, if no other immediate family was available.  This movie points out a very real problem that I’m sure many children have suffered through: abuse (whether emotional or physical) from a family that took you in only as “charity” (and probably because of the money).

As mentioned above, we can see the obvious disdain Indy’s extended family has for her.  She is treated like a lesser-being and is not allowed to grow up in the same way her two cousins are.  This just produces bitterness and anger on Indy’s side of things and she eventually blows up.  She somewhat feels bad about it, but at the same time, her outburst is justified by others because of her situation.  I’m sensing a common theme between this film and A Cinderella Story. “Cinderella” is not as gracious as she used to be and is highly judgmental.  Sarcasm and biting remarks fly out throughout, and while we all enjoy a good come-back when someone says something particularly nasty or untrue, what kind of example is this setting for us?

Cinderella’s story is thrilling and attention-grabbing because something good finally happens to the girl who’s been good all her life.  But with these modern re-tellings, Cinderella becomes entitled, talks back to her elders, and takes control of her life around the very young age of 16-18.  This isn’t the way Cinderella was meant to be portrayed.  However, perhaps this is the most realistic way Cinderella would happen in real life.  I know I wouldn’t be able to make it through 6 years of basic slavery without complaining.

One other note before I conclude, Indy double dips in the boyfriend bowl throughout most of this movie.  Crazy?  I know!  I was not happy with it.  Although it worked out just fine for Indy, in reality double-dipping never works in romantic relationships.  Someone always gets hurt.  In this case, the guy I was rooting for was not the “prince”, i.e. Bryant Bailey.  But of course, my guy lost because Cinderella always ends up with the prince.  I was disappointed for a few reasons.  First, this whole two boyfriend thing was really just a way for Indy to see who she had the most chemistry with.  It’s not portrayed that way, but it certainly came across that way for me.  Second, maybe the other guy was a nerd and maybe he was a little awkward, but I will be honest, I thought he was more good-looking and he had been with Indy for a long time.  Bryant barged in and expected Indy to immediately become his girlfriend (even though in that amount of time, it can only be based on looks).

All things considered, this wasn’t a horrible movie.  It’s definitely watchable.  The content was reasonable and it can be classified as kid friendly.  I don’t appreciate cheaply made movies very often though, so this has dropped really low on my list of Cinderella movies.  I also don’t enjoy heroines that are sarcastic and judgmental.  But hey, that’s just my opinion.

Have you seen this movie?  What about any other Cinderella-esque movies?  Do you have any recommendations?  Let me know in the comments below!

Until the next prince rides along. 🙂