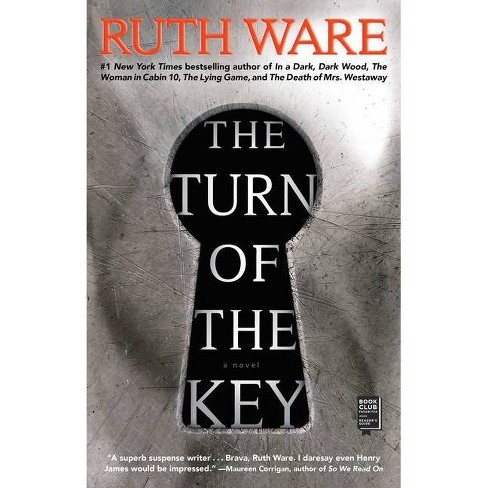 No sentimental or moving quote from this book.  This book is awful, disturbing, and ultimately depressing.  Read the full review and see my take on how this thriller seems to prove the depravity of man.  See you on the other side!  – Megan

You Talked Me Into It

I did not want to read this book.  In fact, I didn’t want to read any of Ruth Ware’s books.  They all sounded creepy and oddly unfulfilling in the descriptions and cover summaries.  But a co-worker asked me every single day for the last few weeks if I had started the Ruth Ware book she read (and very much enjoyed).  And this last week, she inter-library loaned a few more Ruth Ware books and literally shoved one in my hands.  I felt bad, and I didn’t want to disappoint her.  She doesn’t enjoy reading (she much prefers audio books) and so I thought, maybe I was wrong about Ruth Ware.  If my coworker can get sucked into a book and like it, I ought to try it out.

But I regret ever reading this book.

I love a good mystery / thriller.  But not thrillers.  There is a huge, ginormous, gaping, dare I say infinite difference between a mystery / thriller and a thriller.  John Grisham’s legal thrillers and murder mysteries like Anthony Horowitz’s The Word is Murder leave you on the edge of your seat and pull you through their entire plot very quickly, leaving you anxious to see how it ends.  But your average, run-of-the-mill thriller?  All it does is scare you half-to-death, makes you wonder if you’re crazy, leaves you frightened of a horror-like ending, and then the plot collapses at the end raising the question in your mind of why you ever picked this book up in the first place.

You Call That a Plot?

What do you get when you throw together a nanny with secrets, children with serious control issues, a dad with a questionable reputation, a mom who almost helicopters, and a house with a haunted past?

You get a letter from an accused murderer to a lawyer, explaining in minute detail everything leading up to the night that changed everyone’s life.

I’ve said it already, but I really regret reading this book.  It was jarring in a way that I have not experienced before.  I DO NOT do horror movies, stories, books, etc.  I don’t even like reading or hearing about witches, paranormal activities, and the occult freaks me out.  In fact, when I worked at the library, I got very good at checking out horror movies and novels to patrons without having to look at the covers.  I don’t even want to see those things.  But here I am.  Confessing that I have now read a full-blown thriller.  It may be one of the worst decisions I’ve made in my rather short existence.

I’m going to venture out on a limb here and say there was nothing redeeming about this story.  There was nothing funny, nothing encouraging, nothing happy.  I have literally no take away from this book.  And that doesn’t even take into account the content.  In fact, why don’t I just start there.  Normally I would have a paragraph or two on “questionable” or “concerning” content, but this book goes way beyond anything else I’ve read.  Let me try to explain it . . . no, there is too much.  Let me sum up.

There are no less than 208 curse words used here, many of them very high on the “Bad Language” scale.  In fact, 61 uses of f–k and its derivatives catapult this novel to a rare level of obscenity (or maybe not so rare?  I’m seeing a pattern with adult fiction . . . ).  Several sexual-related curse words were used as well.  To give some context for how bad this is, even according to the world’s standards, a movie will immediately earn an R-rating upon a SINGLE usage of a sexualized curse word.

A few negative lines included in the book revolve around sexual thoughts or happenings.  If it had stuck to those few lines, it might not have been bad on the sexual side of things.  But our nanny has a few run ins with the gardener.  Nothing is technically explicitly said about what they do, but we know what they’re doing anyway.  Really, this just adds on to why you shouldn’t read this book.  In fact, the premise for the whole book is the sexual wanderings of the father.  Everything that happens in the book, happens because he cheated on his wife 30 years ago, he cheated on his wife again 5 years ago, and he still consistently cheats on his wife now.  Everyone feels the repercussions, literally everyone.

Now that we’ve covered the content, I have to tell you about the story itself.  Talk about depressing.  Just an FYI: I’m spoiling everything for you in this review.  You’re never going to read it, and you need to know why.  I will be brief though because I have some things I want to talk about.

There is nothing redeeming in this story.  The woman (Rowan, real name Rachel) who becomes the nanny for the Elincourt family lies about who she is to get the job.  Turns out the lie isn’t to cover-up a criminal past or illegitimate credentials (although hers aren’t as good as her roommates’ which she stole), but rather to hide the fact that she is the illegitimate daughter of Bill Elincourt from a relationship he had with Rowan’s mother 20-30 years ago.  Think that’s creepy?  When Bill meets Rowan (and of course doesn’t recognize her because he never met her), he excuses his wife to take care of the kids and blatantly attempts to woo over Rowan and get some sexual favors out of the whole nanny deal.  But wait . . . there’s more.

Bill has apparently been doing this with every nanny that has lived at the house for the last 5-10 years.  The first nanny was going to elope with Bill as soon as he divorced his wife, but oldest daughter Rhiannon figured that out and solved the nanny problem very quickly.  Little sisters Maddie and Ellie looked on, and Maddie in particular began to mimic Rhiannon to scare (quite literally) away any and all future nannies.  Until Rowan comes.  The scaring tactics make this book feel like a horror movie is around the corner, but we find out in the end that it is all explained by the fact that an eight year old girl can climb the side of the house to the attic window where she uses decapitated dolls, an old cellphone, and an iPad to torture Rowan into thinking there are ghosts.  Throw in an attractive gardener and an unfortunately timed rendezvous and you get a dead child who was pushed by her little sister out the window she was climbing on.  Ellie’s excuse?  She loved Rowan and didn’t want Maddie to keep tormenting her.

What a sick, demented story.

To Read or Not to Read

There are no questions here.  You should not, cannot read this story.  We don’t even get the satisfaction of a wrapped up ending.  All we know is that Ellie confessed of the accidental murder of her big sister in a letter to Rowan who was rotting in prison waiting for the trial of her murder of Maddie.  It’s disturbing to say the least.

Do you ever wonder where these stories come from?  How does someone create a plot line that revolves around illegitimate children, misused sexuality and infidelity, murder, and seemingly un-explainable paranormal activities?  Anything is possible for the one who lacks Christ.

If there is one takeaway here, it is that sexual meanderings and faithlessness with one’s spouse produces decades of messy, complicated relationships and horrific consequences.  The entire premise of the book (although you don’t find out until the very end in a rather fall-flat attempt at a climax) is that Bill Elincourt doesn’t love anyone but himself, and that means he has sex with anyone who will get in bed with him.  These consequences are real-world consequences (although murder seems to be taking it a bit far).  But you can learn this lesson in much better places than between the pages of a Ruth Ware novel.

The world is a dark and hopeless place.  We are trained by the world system to think that it will get better the farther along we humans go.  But, in fact, the opposite is true.  We are only devolving.  And we were depraved by the time Cain had grown up!  Thriller stories just gives the world an opportunity to excuse, explain away, and legitimize dark thoughts and desires.  Dear Christian, do not partake of this darkness!  We have been called out of the darkness and have been brought into our dear Lord’s marvelous light!  So let us remain there and leave the darkness to Satan.

Until the next review. 🙂