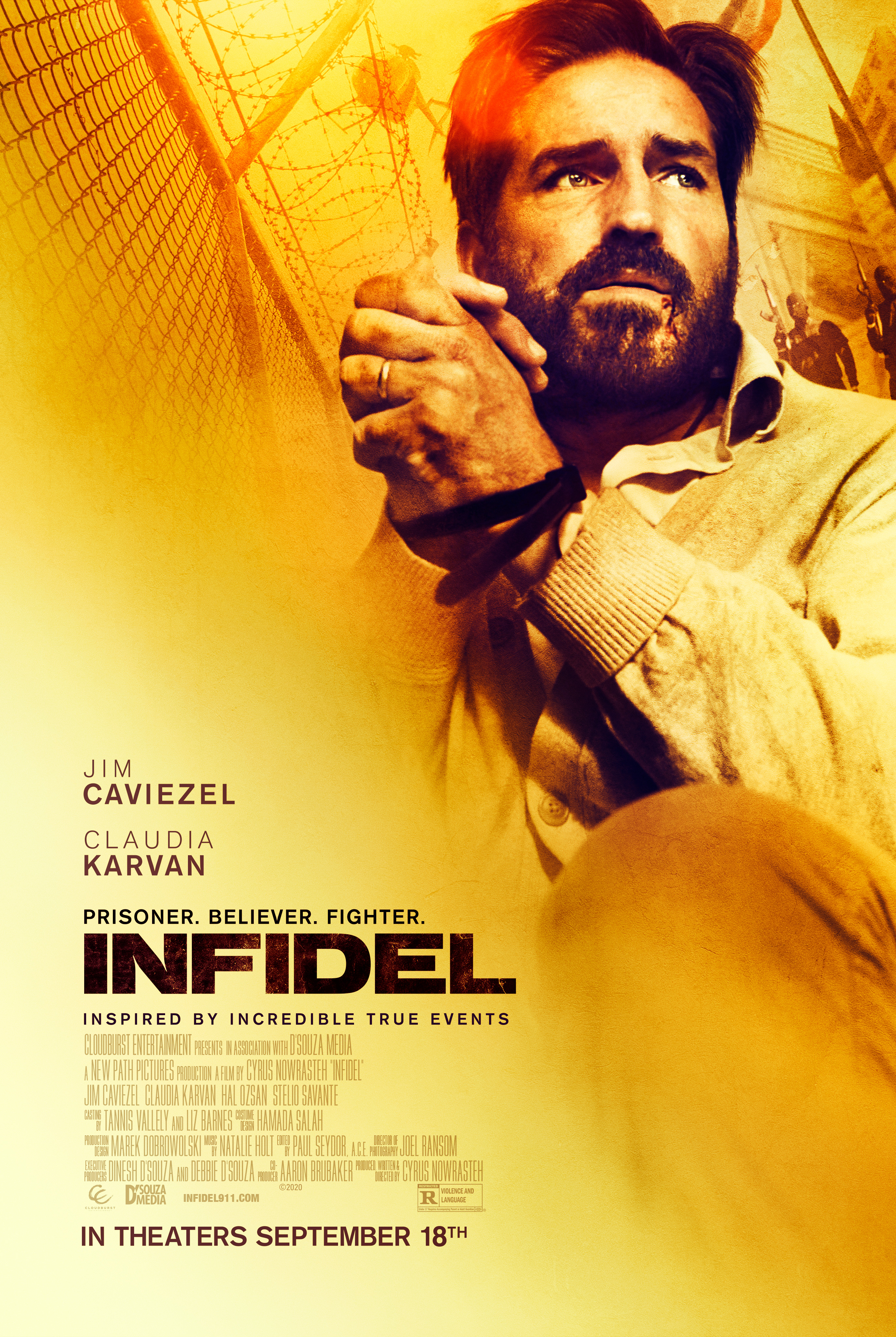 Rating: R for violence and language

One Religion, Many Sects

After recently reading Seeking Allah, Finding Jesus by Nabeel Quereshi, I was convicted about my tendency to lump all Muslims into one category: terrorists.  In reality, there are many sects of the Islamic religion.  Many of them are peaceful tribes who interpret the Koran in a way that does not condone violence.  In fact, these specific sects are some of the most hospitable people on the earth!  They are, however, overshadowed by their extremist counter-parts.

Very rarely do we see films dedicated to the peaceful and hospitable sects and tribes of the Islamic tradition.  Yet again, we have a film covering the extreme tendencies of the followers of Muhammed in their Jihad, or Holy War.  However, it may not be what you think it is.

Doug and Elizabeth (Liz) Rawlins both have government related jobs.  They come in contact and make friends with a wide variety of people.  This includes devout Muslim Javid, one of Doug’s co-workers.  Liz is close to Javid’s wife, Shadya, and teenage daughter, Meena.

Doug and Elizabeth attend Meena’s graduation celebration and all is well.  Javid is a proud papa, and his daughter is up and coming in their “adopted America.”

Later that night, Liz receives a call from Javid’s wife saying that something is wrong, Meena isn’t home yet.  Liz calls the police, and she and Doug rush to Javid’s home.  When they arrive, the FBI are already there, searching for something.  Doug attempts to comfort Javid and his wife, and explains to the FBI that Javid has done nothing wrong, that he is a good man!

The FBI continue to search the house anyway and take Doug into the basement.  What he sees shakes him, and changes his relationship with Javid forever.

Despite what he saw, Doug still flies to Cairo where Javid encouraged him to take an invitation to speak at the university.  During an interview, in which Doug is supposed to be highlighting the unity between Christianity and Islam, Doug instead presents the true gospel: that Christ was not just a good man, but a perfect man, and that He was in fact, God.

The audience and interviewer are shocked, but Doug stands firm on what he says and leaves for his hotel room.  Doug makes it safely to his hotel room and manages a call to his wife, Liz, who stayed in America.  During the call, agents of Hezbollah enter his room and abduct him.  He is spirited away to one of their hidden headquarters in Tehran, and the search for Doug Rawlins begins.

The Good, the Bad, and (Unfortunately) the Ugly

First off, I mainly watched this film because of Jim Caviezel.  If it had been anyone else, I wouldn’t have even considered watching because of the R rating.  That being said, the R rating is an important discussion point.

Infidel is listed as being rated R for violence and language.  I was surprised by the lack of violence in what I assumed was a violent topic.  That’s not to say that the violence that is included is easy to watch and suitable for children.  That’s not the case.

There are several quick shootings, only one shows a bit of blood splattering (you’ll only notice if you’re watching for it).  When Doug is originally abducted, they tape his mouth arms and feet and roll him up in a rug.  He has a bit of blood on his face.  POTENTIAL SPOILER: We see Javid in the family’s basement.  He pulls out a large tarp and two saws.  We see someone tapped to a chair and a violent death is implied, though not shown.  A grenade is thrown and two men die.  We see one of them as he is dying, and he is bloody and burned, though not horribly so..

The most difficult part of the violence is during Doug’s “interrogations” and beatings.  His face is smashed into a table several times.  He endures several other beatings: kicking and punching, whipping while hanging from his wrists, and a threat of electrocution of male anatomy and drilling of his knee cap (neither of these threats actually happen, although we hear screams from a video of a man whose anatomy was electrocuted.)  We see Doug’s face up close in the dark at one point and its bloody.

There are a few flashbacks of a car wreck involving a young couple who were losing their unborn baby.  We see the mother unconscious in the rain with a small amount of blood on her nightgown.

In the full context of the movie, these things seemed minor in relation to what often happens in Iranian prison cells and torture chambers.  That being said, there is somewhat a sense of psychological violence here.  I was on pins and needles the entire movie waiting for the really ugly stuff.  But nothing happened.  It was all in my head.

Inappropriate content was not a major issue, but there are a few things to consider.  Liz walks herself into a bad situation very quickly, but is luckily saved by Christians who have followed Doug’s blog.  Nothing happens, but it is easy to see what is implied would happen if Liz was not saved.  Two Muslim extremists break into Liz’s hotel room while she is showering.  We see her in a towel.  At the beginning of the film, Liz gifts Meena with “ladies things” and she also mentions that Meena might have gone to a belly dancing class.  During Meena’s graduation party, Meena dances with her dad, not completely suggestively, but her dress is a little revealing.  Her would-be American boyfriend joins her on the dance floor and things get a little more uncomfortable.  Javid is obviously displeased with the boy and with Meena’s behavior.

The real issue behind the R rating is the language.  It was a disappointingly colorful movie in that regard.  The F-word was most common and is used prolifically by one character in particular.  A-hole, Bull-s, hell, d–n, and s–t were also used.  Christ’s name was not taken in vain often, but more than enough.  I did not think it was necessary to have this much language.  Do Muslims even cuss??

The Issue of Quality

Jim Caviezel is an amazing actor.  Claudia Karvan and Hal Ozsan who star alongside Caviezel were also very good.  However, I feel that they didn’t have much of a script to work with.  Ozsan basically just had to drop the f-word at least once a sentence, and Karvan spends most of the movie arguing with political leaders and her husband.

What the movie has going for it is a mystery/thriller feel.  You have no idea what’s going to happen.  At one point, I thought the movie was over, end of story.  But the show was not over, and there was quite a bit more!  It will surprise you, but it is very satisfying.

Spiritually, I felt there could have been more Christian points and conversations, but at the same time it was realistic.

The main point that I felt was being pushed here was that most Muslims can and will be terrorists and spies invading America.  We know this is true to a certain level, but there needs to be a healthy balance.  Fear mongering never did anyone a lick of good.  There could have been more balance in this film, but POTENTIAL SPOILER we do see that some Muslim guards at the Tehran prison are willing to help Doug and others escape from the Iran government because they do not truly identify with the extremists holding political prisoners for trials and executions.

Side note added on 3-3-21: After a conversation with my mother, she mentioned that the main point really is that Muslims and Christians cannot and do not mix.  I didn’t catch this, but I should have.  I was too caught up on what the media’s take on this film would be to understand the real truth behind it.  This is a powerful message that the world will never understand, even in regards to other religions: Christianity is an exclusive religion

The actual filming of the movie was not impressive, and was downright headache inducing in a few spots.

I have been unable to confirm if there is one, specific true story that is linked to the making of Infidel.  That aside, while this particular film may not be exactly true and based on fact, it combines many elements from similar events that have happened in the recent past.

What’s interesting to note about this film is the director, Cyrus Nowrasteh.  I knew nothing about him before watching this film (and I still know very little).  Seeing the agenda that seemed to drip from the dialogue in nearly every scene, I was curious to see what was really happening here.  After digging (I didn’t have to dig very far), I found that Nowrasteh directed a very controversial dramatic mini-series called The Path to 9/11.  Thanks to the Democratic party, this film was blocked from being sold as a DVD.  As far as I can tell, it was played for two nights only.  It was never released and so the greater American public has never seen (and will never see) this mini-series.*

I am somewhat conflicted on this one.  The amount of language pushes me to say you should consider skipping this film.  The content besides that was not nearly as horrendous as it could be, given the topic.  The actors are wonderful, but have little script to work with, and while the movie itself is gripping, the story felt almost impossible (especially with Doug’s wife going to Iran).

With the side note I added in the review portion, I must say that the value of this movie went up.  When I finally understood the real truth behind this film, I could see clearly the importance of what was said.  Perhaps it’s not perfectly obvious or front and center for some (for instance, me!), but the point is worth considering: are you ever guilty of believing that Christianity is inclusive rather than exclusive?

All in all, don’t think too hard about this one.  If you like Jim Caviezel, maybe you should give it a go.  Otherwise, go read books from Voice of the Martyrs publishing and you will find both better quality and greater encouragement in your walk with Christ.

*If you want to look into the info I gave on The Path to 9/11, HERE is the link to Cyrus Nawrasteh’s website.