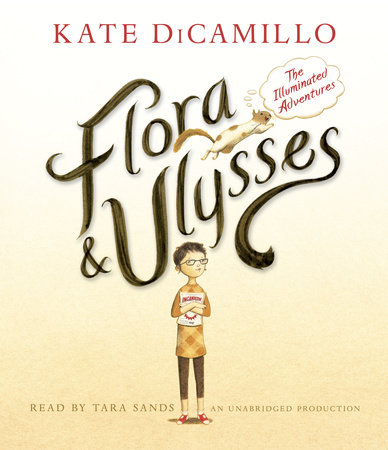 “Who would ever think you would shout, ‘You’re going to vacuum up a squirrel!'”

Ladies and gentlemen, I now introduce you to one of my most favorite authors!!  Drum roll please . . . . . . Kate DiCamillo!  Oh. My. Gummy-bears.  I love DiCamillo’s children’s literature.  I read several of her books as I was growing up, and have revisited them over the years as I have felt the need to return to that feeling of childhood days.  Does anyone else read books purely for the joy of sentimentality and reminiscing?

I’ve read Because of Winn-Dixie, The Tiger Rising, and The Tale of Despereaux before, but I wasn’t aware of the book Flora and Ulysses until a month or two ago when some friends of mine watched the movie on Disney+.  I was quite intrigued and quickly looked up the book.  I was drawn in by the whimsical cover and immediately got it from the library.  I also attempted to drag in my let’s-pretend-we-are-a-book-club friend to read it with me.  It wasn’t exactly her cup of tea ( 😉 ) . . . but let’s get into what I thought about it!

It is another unassuming, boring day in the neighborhood when Mr. Tickham gives his wife, Mrs. Tickham (also known as Tootie) with a vaccum.  Now, this is no ordinary vacuum.  It’s a Ulysses Super-suction, Multi-terrain 2000x Vacuum Cleaner and . . . oh, whoops.  There it goes!  And Mrs. Tickham can’t let go of the handle!

Flora is a cynic.  A helpful cynic, but a cynic nonetheless.  She enjoys reading the comic books about Incandesto! the janitor turned super-hero.  She also avoids her mother, Mrs. Buckman, who spends all her time writing romance novels.  Flora the cynic was reading one afternoon when there was a commotion in the Tickham’s yard next door.  Would you look at that.  Mrs. Tickham is vacuuming the yard.

That’s when it happened.  Poor squirrel, he was in the wrong place at the wrong time.  And unfortunately, he could not out-race the Ulysses Super-suction, Multi-terrain 2000x Vacuum Cleaner.

That’s when Mrs. Tickham said, “Help.  I think I’ve killed a squirrel.”  And that’s how the adventure started.

My Super-Hero is a Squirrel

Full disclosure, I did not like Flora and Ulysses as much as the other DiCamillo books I’ve read.  It was still sweet and creative, but wasn’t quite as well written as her others.

This is children’s literature, so there isn’t nearly as much a worry over content as with youth and adult fiction.  However, there were some older themes in this book, putting it more in the 10-12 or 12-14 year old category of reading.  Flora’s parents have divorced recently which contributes significantly to the plot, and her mother also writes romance novels (this to me seemed an odd thing to put in a children’s book).  I think the romance writing of the mother was unnecessary (it will probably go over most children’s heads), but it also wasn’t creating situations of unsuitable content.  Writing about divorce is not a serious issue – especially these days – but for children raised in solid, Christian homes it may be a conversation starter.

Although Flora and Ulysses didn’t quite attain to the level of The Tale of Despereaux for me, the writing was still very typical of DiCamillo.  It’s funny and witty, to say the least.  It’s also touching and very sentimental.  I laughed so much in this book, I think everyone at work wondered what on earth I was doing.  Flora gets some of her vocabulary from the Incandesto! comics and that includes “Holy bagumba” which for some reason was one of my favorite lines.  The character William Spiver is also quite hilarious, mostly because of his serious attitude towards the entire universe.  It’s like he’s 8 going on 80, but he’s also a philosopher.  He comes with drama, but he’s a good opposite to Flora!

Have I mentioned that my new super-hero is a squirrel?  Yes, you just read that right.  I mean, who wouldn’t love a squirrel that can type and write poetry?  He also flies.  And he understands humans when they talk.  It’s too bad he got sucked up in that vacuum . . . or is it?  Now you have to go read the book, because you need to know what I’m talking about.  🙂

To Read or Not To Read

I’d say I almost feel neutral on this one.  Haha, you’ll never hear that again folks!

But really, I wouldn’t say this is necessarily a must-read when DiCamillo’s other books are better.  I also won’t say you shouldn’t read it.  I could go either way.  I honestly don’t know whether I would read it again or not.  It’s probably a book that I would read again when I am in a very specific mood, that may or may not happen again.  But, for families, this is probably a good candidate for a read-aloud book.

Side note: I have only watched the last 10-15 minutes of the movie and it was not all that much like the book.  So if you are here wanting to read the book because you liked the movie, you may or may not be disappointed.

And with that, this review is a wrap folks!  Have you read any Kate DiCamillo before?  What’s your favorite?  Comment below!

Until the next vacuum cleaner escapade.  🙂