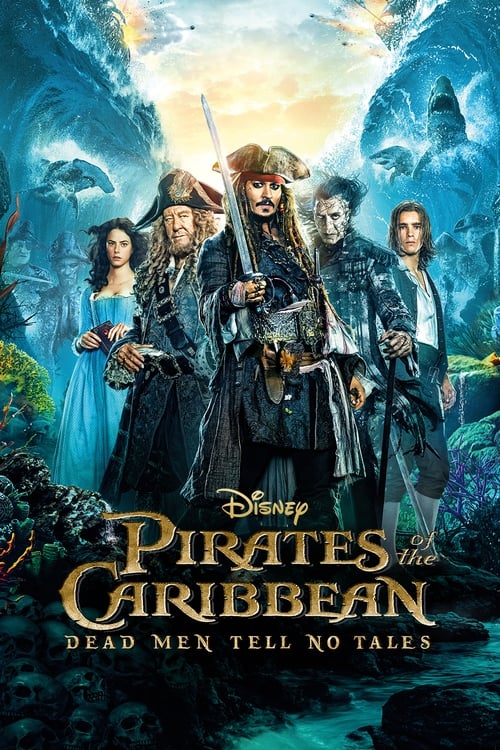 Pirates of the Caribbean: Dead Men Tell No Tales (2017)

Rating: PG-13 for mild language, sequences of adventure and violence, some sensuality, and suggestive content

I went to the library last night and decided it was high time to throw together some more movie reviews.  I’ve been a little quiet on all fronts lately so I chose 4 movies (not one . . . not two . . . four) and started on the first one last night.  I chose to watch Pirates of the Caribbean first, but the only reason was because I keep second-guessing myself on whether I want to watch Hacksaw Ridge or not.  (For parties concerned by that title – it is a WWII film covering one of the bloodiest battles right before we dropped the A-bomb on Japan.  It is not a horror movie. 🙂 )

I was very curious to know what on earth they could do with a fifth Pirates movie.  I haven’t seen the fourth, On Stranger Tides, because I heard something about killer mermaids and that threw me for a loop . . . I’ve tried a few times to start in on Dead Men Tell No Tales and just haven’t found the motivation to start and finish it.  I found my motivation last night and I was . . . surprised, confused, bored, but also slightly entertained.

Young Henry Turner, the unfortunate offspring of Will Turner and Elizabeth Swann’s very short wedding day, is searching for his father.  And he finds him.  But he finds a man overtaken by a curse, and at the bottom of the ocean.  Forced to leave him behind after a brief interlude, Henry vows to save his father from the curse.

Fast forward nine years and we meet the luckless Jack Sparrow and a astronomizing, mathemetizing girl fleeing charges of witch-craft.  Henry Turner is to hang for treason, but he claims he has seen the ghost of the pirate-murdering (but also very dead) Captain Salazar and he carries a message for Jack Sparrow.

Sounds like enough of a plot . . . why don’t we make a two-hour movie out of it?

Are We Trying to Fix Something?

I was less than thrilled with the dramatic, hollywood-esque ending to At World’s End.  Why couldn’t Elizabeth just go on the ship with Will?  What would keep her from being part of the crew?  And why does Will choose his father over Elizabeth?  Loaded questions, all of them.  And the confusion carries into this latest addition to the Pirates saga.  (Side note: what’s really funny is that this is technically a movie series about pirates and Jack Sparrow in particular, but Will Turner and Co. take up most of the screen time!)

First off, I felt very much like Disney attempted to fix their very depressing ending in film #3.  Granted, we do get to see a little reunion scene at the very end of At World’s End when it’s been 10 years and Will can return to shore for a day.  Whoop-dee-do.  Nevertheless, Elizabeth Swann is essentially a single mother who has nothing to look forward to but a brief rendezvous every 10 years.  But wait!  Disney to save the day!  Henry Turner has studied every legend, every folktale, every curse, you name the myth, he knows it.  And he has discovered the cure-all to literally everything: the trident of the sea god Poseidon.  Wait . . . where has this trident been for the last 20 years?  Up Disney’s sleeve apparently.

The comedy in this fifth adventure through pirate-infested (oh, and ghost-infested) waters was lacking.  Really lacking.  The first three films, but especially the first, did a nice job of lightening the tone and making us laugh when things seemed to be the most dire.  But here in Dead Men Tell No Tales we only get a few one-liners that try to be funny, but didn’t try enough.  It all fell flat.  Except for one scene . . . jokes against the French may be my favorites.  I have nothing against the French, but they are so easy to make jokes about.  Let me explain: close to the beginning of the film Jack Sparrow is again sentenced to death (was I surprised? Not one bit.) and this time gets to choose his method of execution.  There is the hangman’s noose, the firing squad, and a new method called the gill-o-teen (written as pronounced by the uneducated red-coat who told Jack this.)  Jack smiles and says,

I laughed so hard when he got his first look at the “gill-o-teen” and changed his mind about how he wanted to be executed.  Of course, Disney made an entire romping, hysterical scene out of Jack almost getting beheaded.  It’s the funniest moment in the film.

The other problem I had with this movie is the plot line.  It’s not a horrible plot, and in fact it has several twists and turns that were interesting, even surprising.  But the movie did not need to be two hours long.  Not even close.  It could have been shot in an hour-and-a-half easily and still pleased the crowd.  There was too much lolly-gagging at the beginning.  It’s not a horrible crime to lengthen a movie unnecessarily, but I kept waiting for the plot to get going.  And it did . . . eventually.  Also with the plot, there were a few characters/situations that weren’t really wrapped up.  Also not a crime considering they fixed the ultimate problem of the terrible ending of film #3.  But nevertheless, it’s bad writing form to leave things hanging (and these were not things that could carry into a 6th film in my mind.)

Another plot issue that carries from the second film through the third and into the fifth is Will Turner’s decision to choose his father over his would-be-wife Elizabeth Swann.  Why?  I don’t know.  Apparently blood is thicker than love.  But here in the fifth film, Will asks his son in the very first scene to forget about him, to leave him behind and never come back.  He asks his son to do what he couldn’t with his own father.  And of course Henry doesn’t listen and thus we have a fifth movie.  But the fact remains, why couldn’t Will have figured out how to get rid of the curse rather than just taking it on instead of his father?  I’m going crazy, but you know what, they didn’t ask my opinion when they made this movie.  I could’ve been such an asset.

Now on to the content.  Brace yourselves, dear readers.

Jack Sparrow is a womanizer.  We all know that.  But Disney really pulled out the sensual content here.  Jack is found in a safe near the beginning of the film, having presumably spent the night with the wife of the top-honcho in town (we see her holding her somewhat clothed breasts as she runs out of the safe in front of the entire town.)  Jack makes lots of suggestive comments and seems to still be pining over Elizabeth Swann . . . or more accurately her body.  He also encourages Carina (the astronomer and mathematician who is drawn into this adventure for her possession of an important map) to continue removing clothing when she strips off her dress to swim for shore and escape the dead/ghost pirates chasing them.  She keeps her under-things on (pantaloons and a white shift with a corset like cover-up on top) so we don’t see much, but the fact that Jack seems so obsessed with the female body and . . . let’s just say it, sex . . . left me very disappointed.  Henry gets excited at one point because he sees Carina’s ankles and Jack blames him for nothing more happening.  We also see a lot of cleavage from Carina whose dress is rather low, as well as cleavage from a few other minor characters.

So far . . . Disney is not doing that well in this movie.  And we haven’t even covered the violence.  Sigh.

This movie was quite violent.  That’s not to say the last movies weren’t violent, but the body count here seemed very high.  And the dead pirates . . . it wasn’t quite disturbing, but I’m not even sure how they ended up looking like that.  They are literally charred, cracked pieces of themselves.  They burned in the Devil’s Triangle years ago and are now cursed until a certain pirate gives away a certain item, at which point they are somehow mysteriously free to take their revenge.  The captain especially is cringe-worthy in appearance with blood seeming to drip from his mouth (though not really through the entire film.)  We don’t see blood and guts when these ghost pirates kill hundreds and destroy dozens of ships, but the fact that it’s happening is saddening.  Especially considering the reason this Captain Salazar as he is called is doing this in the first place.  But I can’t spoil the film so I will leave it at that.

To Watch or Not To Watch

Long story short?  Watch the first Pirates of the Caribbean and leave the rest alone.

The only reason to watch the fifth movie is to redeem the ending of At World’s End (which you don’t have to worry about if you only watch the first film) and to watch Brenton Thwaites, who plays Jonas in The Giver film and is a favorite of mine, as Henry Turner.  Other than that, the sensuality and suggestiveness, the violence, and the somewhat scary dead-but-somehow-alive pirates leave me questioning whether this was worth a watch.

All in all, this isn’t the best for a family movie night and there are other sea adventures more worth your time.  Might I suggest Master and Commander for older audiences and Muppet Treasure Island for the younger ones?  They will serve you greater and present a better plot with greater humor and a more impressive cast of characters.

Until the next pirate invasion. 🙂